A Right of Passage…the VISA Logo 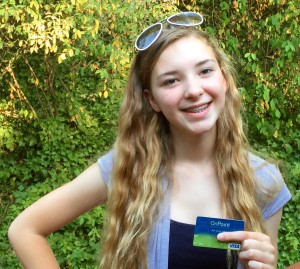 Recently I had the pleasure of bringing my daughter through a right of passage. This is not something most would view as a right of passage, but for someone who is devoted to financial literacy I couldn’t help but take a pause. My daughter, 13 years old, just got her first debit card!

Over the last year, my daughter accumulated funds from babysitting and watching our neighbors’ animals – too large of a sum to be stashing away in her bedroom. She also experienced an incident last Christmas, where she was shopping for gifts for the family, took close to $100 in cash with her, and lost her wallet. This brought to my attention the need to extend her banking services and add a checking account. Along with the checking account came a debit card armed with… the all-powerful VISA logo.

After depositing the cash she had accumulated into the checking account, I found that she had more discretionary funds available than I did! At first she was a little reluctant to use the debit card, but soon she got the hang of it – so much so, that she spent $180 in one week – an amount likely greater than she had spent in the last six months combined.

My daughter quickly experienced a common psychological effect involved with spending, because people typically spend at higher rates when paying with a card than with cash. We always feel sad when we part with our money, but when we hand cash over to a cashier, we trigger an especially negative psychological response. This emotion decreases when we instead hand a card over to a cashier because the negative response is delayed until the moment when (and if) we check the balance in our account.

Despite the initial urge to comment on her spending, it didn’t feel right to tell her how much and how often to buy. It’s her money, and I could tell by her reaction to viewing her account balance that she had learned on her own how easily money can go when paying with plastic.