A Penny Saved Is a Penny Invested

Yesterday I was paying the bill for my toddler’s daycare, and bracing for the annual rate increase, only to be pleasantly surprised by a decrease. My three year old is now moving up from daycare to preschool. The difference between my former two year-old and my now three year-old is significant. Changes include ridding our house of diapers, not having to replace her wardrobe every three months, and no longer having to follow her around worrying about what she is going to get into.

As children reach the age of three, their budding independence allows daycare providers to increase the child-to-teacher ratio. This begins preparing children for a classroom setting and results in a decrease of $100 per month in my childcare bill. An opportunity quickly presented itself.

Instead of allowing these funds to get lost in my budget and spent on unnecessary items I will shift these funds towards my daughter’s college savings fund. I have already established a 529 college savings account through our state’s plan, the Oregon College Savings Plan. To date, her account has been mostly funded with birthday and Christmas funds from family members. Take a look at what shifting the $100 from her childcare expense to her college savings does.

Still, we know that with the rate at which college costs are increasing $41,892 is likely not going to be enough to fully fund my daughter’s college education. But there are more upcoming opportunities for me to increase this savings. In two years she will be heading off to kindergarten (wow, time flies) and this will significantly decrease my childcare costs. What if I invest that saved money and increase her monthly college savings to $300? Now I find my daughter with over $100,000 in her college savings account. 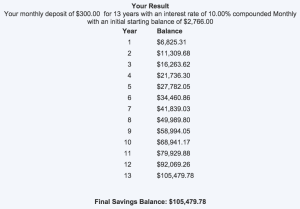 If you build it…will they come?

This is a question we all ask when planning educational events. Though its common knowledge there is a huge need for financial education usually the people who need the information are not going to seek it out. One of the struggles many of our partners who serve adults face is getting people to attend their events. Financial Beginnings is fortunate we don’t need to recruit our audience because our classes are in the in schools or community groups where are audience is already gathered. They are stuck hearing form us if they want to or not.

Last week was Money Smart Week in Oregon. Financial Beginnings and Operation HOPE decided that we wanted to expend our efforts beyond our youth in school programs during Money Smart Week. I have always wanted to have an open forum for adults to be able to ask their questions regarding personal finance. With laws and industry norms changing so frequently in addition to money always being viewed as a taboo subject I thought people have a forum to where they can ask questions would be wonderful. Money Smart Week gave me the push I needed to finally organize one of these forums and we named it Unraveling the Mysteries of Your Money. You’d be surprised how long it took us to come up with the name.

At Portland State University we brought together experts within the financial industry including; Jim Hunt from OnPoint Community Credit Union, Michael Parker from the Oregon College Saving Plan, Nelson Rutherford from Alten, Sakai & Co, and Diane Childs and Fernando Velez from the Oregon Division of Finance and Corporate Securities. The moderator of the panel was Brent Hunsberger, It’s Only Money columnist for the Oregonian Newspaper. Brent’s diverse knowledge in personal finance combined with his reputation in the community really helped to bring exposure and credibility to this event. You would think that with this great group this would have been the hard part of my task, but this was easy.

The hard part was the promotion and getting people to come to the event. I hear it time and time again from event organizers that it is so hard to get people to come. Having the event be free may even make it more difficult in some respects because of the perceived value. If people pay for attendance to an event they may tie a higher value to it and may be more likely to attend.

As of the three days before the event we had less than 10 people registered to attend. My anxiety level was high and I was so worried I was going to waste the panel’s time because nobody would show up. So we marketed it hard. All of the panel members helped to promote the event. Brent wrote about it in the paper and Nick Allard from KGW brought us on the bricks to promote it. We ramped up our social media and contacted all of the business professors at Portland State.

The registrations started flooding in, we maxed out the registration. We even added more seats because our experience has shown that usually only 2/3 of those that register end up attending free events. Our predictions were correct and we ended up with about 2/3 of those who registered attending.

I was so pleasantly surprised by the diversity of the crowd and their eagerness to hear from the panel. We had several planned questions in case the audience did not have questions right away, but Brent was only able to get one of the planned questions out and the audience took over from there. I saw several individuals in the crowd filling out multiple pages of notes. When time ran out several audience members flocked the panel for additional questions. It was like they were rock stars.

Aspects I see attributing to the success of the event:
• Having Brent Hunsberger of the Oregonian as the moderator added a lot of credibility to the event and his writing about it gave the event more exposure.
• Holding the event at Portland State University also added credibility to the and highlighted the educational component of the event.
• The panel was made up of high level and respected individuals.
• The varied marketing proved to be successful based on a pole of those attending reporting how they heard about the event.

We will definitely hold the event again next year during Money Smart Week. We have created a great foundation for the event and will be able to build upon this more next year.

Last night as we were watching the news before bed and found out Oregon State Treasurer Ben Westlund lost his battle with cancer and passed away.  This hit close to home since I have worked closely with the Westlund both through my work with the Oregon Jump$tart Coalition and Financial Beginnings since his nomination as State Treasurer.  http://www.oregonlive.com/politics/index.ssf/2010/03/democrats_republicans_remember.html

Westlund’s passing caught many by surprise including me.  It was just in October that he had announced that his cancer was back.  That announcement also took me by surprise in October because the announcement of the cancer returning came right afater after he spoke at Financial Beginnings’ Annual Tribute Event.  The next day I had lunch with him and we spoke about our plan to bring personal finance instruction back into Oregon schools.  This was the first time I got to firsthand witness his ability to get everyone around him energized about his cause.

When Westlund was running for office in 2008 I saw him in a debate with his opponent Allen Alley at City Club.  I must admit I was very drawn to Allen Alley’s charismatic personality and many of the points Alley made.  But, the number one issue that got my attention was financial literacy and Westlund brought it up twice during the debate while Alley did not broach the subject.  I became sold on Westlund for Treasurer.

Financial Literacy has long been a priority in the Oregon Office of the State Treasurer.  Westlund’s predecessor, Randall Edwards, focused a lot on financial literacy.  Edwards created such programs as “The Price Is Wrong” (a financial literacy game show presented in Oregon schools) and “Reading Is An Investment” (a program run by the Oregon College Savings Plan which donates books to Oregon elementary schools with financial lessons).  Westlund has continued the Reading Is An Investment program http://www.ost.state.or.us/Read/Index.htm .  The Price Is Wrong has also continued on through the Oregon Jump$tart Coalition which has updated the program to be an interactive Jeopardy game called “Jeopardized”.

Westlund’s campaign platform around financial literacy was to create a comprehensive financial education resource clearinghouse for Oregonians similar to the one that Jump$tart has.  Well as the chair of the Oregon Jump$tart Coalition this interested me obviously.  Westlund lived up to his promise and within a few months of being in office contacted me about how to work together to increase the financial literacy of Oregonians.  He lived up to his campaign promise!

On a personal note, I was very saddened to hear of the passing of Westlund because of my experience working with him was validation for my work in the financial education industry.  I recall back at the lunch in October Variny Paladino from National Jump$tart asking Westlund why he wanted to work with Jump$tart and he said “because of Melody”.  Wow, did that ever surprise me.  He commented on my energy and the work I’ve done in the industry and how he wanted me to help him in moving this cause forward.  What a huge compliment that was.

I am truly honored to have had the privilege for knowing and working with Ben Westlund.